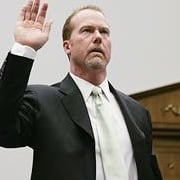 When he retired following the 2001 season, Mark McGwire appeared to be a first ballot lock into the Baseball Hall of Fame.

Since his retirement, McGwire refused to answer questions about using performance enhancing drugs during his Major League career on Capitol Hill as baseball’s steroid scandal came to the forefront.

Now that McGwire’s name appears on the ballot for the first time, several hall of fame voters have already openly claimed they will not vote the slugger into the Hall given the questions surrounding his potential steroid use. With McGwire’s controversial nomination making headlines, PinnacleSports.com today announced odds

on Big Mac’s Cooperstown chances including if he’ll be elected into the Hall of Fame this year.

The largest sports betting site on the Internet, PinnacleSports.com currently lists McGwire as a distant 15/1 long shot to join the ranks of baseball’s all-time greats by being inducted into the Hall in 2007.

Despite ranking seventh on the career list with 583 home runs, the odds are severely against the former Oakland and St. Louis first baseman having his plaque hung in Cooperstown in 2007 at 1/18 odds.

Following an informal survey of baseball writers which indicated that only one in four planned to vote for McGwire, PinnacleSports.com has created an over/under line on the percent of Hall of Fame voters that will select Big Mac, which stands at just 31 percent.

“Mark McGwire’s statistics alone indicate that he’s a surefire Hall of Famer, but there’s a clause on the ballot telling voters to also consider character when selecting players for the sport’s highest honor,” said Simon Noble of PinnacleSports.com. “Although he never tested positive for a banned substance, allegations that McGwire used steroids during his playing career have severely tainted his reputation and may have damaged his Cooperstown chances beyond repair. Bettors certainly don’t like Big Mac’s prospects of being a first ballot Hall of Famer, as nearly all bets placed to date have been against him joining Cooperstown’s class of 2007.”

Will Mark McGwire Be Voted Into Hall Of Fame Class Of 2007?

What Percent Of HOF Voters Will Vote For Mark McGwire?

For a complete list of odds, please visit pinnaclesports.com