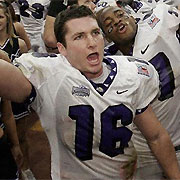 That offensive juggernaut, the Baltimore Ravens, were a 2-TD favorite last week over the Raiders. The Ravens have only been a double-digit favorite 8 times since 2000, but their record is 8-0 SU, 6-2 ATS in those games. No problem. The Ravens crushed the Raiders 28-6, covering with ease again.

Why? Home field is one key handicapping factor. Home field is very important in pro and college basketball, where almost all teams play significantly better at home. It can also be an important factor with some football teams. The Ravens happen to be one of those teams in recent years that easily play their best ball at home. In 2005, the Ravens were 6-2 SU, 5-3 ATS at home, but 0-8 SU, 2-6 ATS on the road. In fact, Baltimore is now 20-6 SU, 15-9-2 ATS its last 26 home games.


It's not like this for all pro football teams, but it is a handicapping factor that needs to be examined carefully and taken into account. Seattle is another one. The Seahawks last season went to the Super Bowl, but it wasn't a result of their road play: Seattle was just 5-3 SU, 3-4-1 ATS on the road in 2005. But at home they were 10-0 SU, 8-2 ATS. Part of the reason is that Seattle is in the Northwest and it can be a long road trip for many opponents. They also have a terrific home crowd that supports them. Many opposing players have said it can be difficult to hear the QB counts, especially near the end zones.

Domed stadiums often provide a key advantage for home teams, as well. A few years ago when the Rams and Vikings had some strong teams, they were very difficult to beat at home, but far less imposing on the road. From 1999-2001 the Vikings were 20-6 SU at home, but 8-18 SU, 7-18-1 ATS on the road. The Vikings just topped Carolina at home last week which makes them 10-3 SU, 8-4-1 ATS their last 13 at home.

Last week I used this handicapping tool when I released a play on the Seattle Seahawks hosting the Arizona Cardinals. Home/road was a clear edge, as the Cardinals have been a weak road team the last few years while the Seahawks have a significant home field advantage. The Cardinals are 5-29 straight up on the road. Last year they beat only St Louis and San Francisco away from home. Those two teams combined for a 10-22 straight up record last year.

Seattle beat Arizona by a combined score of 70-31 last year. Arizona allowed an average of 28.7 points their last 15 road games. Keep in mind that they played the weak offenses of San Francisco (3 times), Houston, Detroit (twice) and Buffalo in those 15 games. Seattle has averaged 29.8 points per game their last 11 at home. Seattle jumped to a 14-0 first quarter lead on the way to another home win and cover. They had the edge in rushing yards 146-65. It should have been even more one-sided, as Seattle had five dropped passes, a blocked field goal, and a 14-yard punt.