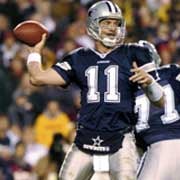 Winning football picks from NFL Experts? When betting on the NFL handicap the quarterback before making a football bet. There are all kinds of match-ups to examine in football, such as the running game, the defensive line, coaching, home field, hot streaks, and injuries. However, let's not overlook some of the most basic elements of football handicapping. Who met in the last Super Bowl? The Seahawks and Steelers, quarterbacked by Matt Hassellbeck and Ben Roethlisberger. They year before?

Discuss how to win betting the NFL with expert picks!

For the most part, it's still about the quarterback in pro football when betting the NFL. That's not surprising, as the offense revolves around that pivotal position. Even teams with powerful running games need an above-average quarterback to keep defenses honest.

There was no better example than Sunday night's battle between Seattle and Denver for people who bet the NFL. The Seahawks won as a road dog largely because Hassellbeck has returned after missing four games with an injury. He's a sound field general, passer and decision maker for the defending NFC Champs.

The stumbling Broncos ? Oh, they just lost their third game in a row. The biggest factor is behind center where rookie QB Jay Cutler was making his first NFL start. If you watched the game, you saw exactly why QB play is so important. Cutler played like a rookie, passing for under 80 yards if you take away one late 7-yard pass play that ended up a 71-yard TD. Cutler player poorly, looking nervous, uncertain, and confused, which is not surprising. It's unfortunate for Denver as they have a talented all-around team that is capable of making a postseason run, just like a year ago when they hosted the AFC Championship game. Alas, they have a serious hole at the most important position on the gridiron.

Denver is hoping to do what the Patriots did five years ago, bypassing veteran QB Drew Bledsoe with a kid named Brady. However, that is extremely rare and difficult to do. Dallas is also trying that rout, benching Bledsoe (how ironic) for Tony Romo, who has played very well.

Romo completed 20 of 34 passes for 257 yards in Sunday's huge win at New York. Romo is interesting, as he has excellent mobility, a quick release and has shown good decision making overall. Dallas is on a 5-1 SU, 4-1-1 ATS run under Romo.

And speaking of QB play, the Chicago Bears will be going to the postseason after a win over the Vikings 23-13, to improve to 10-2, tied for the best record in the NFL with Indianapolis and San Diego. However, if quarterback is the most important position, you don't know what to expect from this offense in January. Young QB Rex Grossman has struggled badly since that Monday night game at Arizona in October.

Despite the win Sunday, the Chicago offense was outscored 9-7 by the defense and managed only 117 net yards. Grossman was awful again, completing 6 of 19 passes for 34 yards and three interceptions to post a passer rating of 1.3. He has completed 54 percent of his passes for 2,424 yards, with 18 touchdowns and 17 interceptions and a passer rating of 72. Coach Lovie Smith said, "We know we have to play better on the offensive side of the football, and we will." Which means Grossman had better improve, or they will be looking at options in the offseason, or sooner. Brian Griese, anyone?

Any hope of a return to the Super Bowl went up in smoke when Eagles QB Donovan McNabb was lost for the season, and the biggest reason why the Steelers won't repeat is Roethlisberger's poor season (20 interceptions). So as you begin to assess how prepared teams are for the postseason, start with QB play