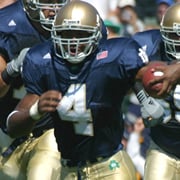 Football and Thanksgiving go together like Santa and Christmas. This week, over turkey with all the trimmings, discussions at dinner tables across the Nation will tell which team the public wants to bet. However, if you want avoid the gambling equivalent of indigestion, there are some key points to understand when sports books talk about “public money”.

The strength of some teams seems so obvious that every armchair quarterback wants to believe they’re unbeatable. Selective memory takes over, as bettors see only one outcome and pour their money onto the “sure thing” after convincing themselves that the facts are overwhelming. The greatest weakness with these “locks” is they’re so easy to recognize that everyone has the same idea.

What many players don’t realize is that the line reflects this and in many cases, books overcompensate for these public plays.

An old rule of thumb was that if you saw the public on one side of a game, stay off that team! One of the best kept secrets in gambling is that the average player wins only 49% of bets against the spread. Until a player develops their handicapping skills to become better than average, not even Pinnacle Sportsbook’s ultra-competitive -104 style pricing on NFL sides will help them.

How can the public possibly do so poorly? In simple terms, the public thinks with their hearts and not their heads. If a line moves from -3 to -3½, public bettors are almost oblivious to the loss in value playing the favorite, and will keep betting it, regardless.

To find who the public is playing in a game, look no further than your office or circle of friends. If everyone around the water cooler seems to agree what the right side of a game is, you’ve most likely found the public side. Further clues of public plays, include the use of terms like “National Champion”, “Undefeated”, and “QB Injury” when referring to a team.

How can you bet with your head and avoid being one of the squares? One concept to set you apart from the public is to look past short-term streaks. For example, let’s take a look at the Cincinnati Bengals. I chose them because at 5-5, they look like an “average” team. The Bengals began the season 3-0 and as a result, this average team started receiving public money. Meanwhile, sharp bettors did not get excited over the quick start because it was “just three games”.

The Bengals then proceeded to lose five of their next six games, and were suddenly a “bad” team on a three-game losing streak. The public, ripe to fade such teams, were disappointed when Cincinnati upset New Orleans. The sharps, viewing the season as a whole, saw the Bengals as just an average team – sometimes good, sometimes bad, but just average overall.

Teams that look either great or terrible are seldom as extreme as their records appear. The public doesn’t appreciate this, which gives rise to many profitable opportunities. If an average or good team wins back-to-back blow-outs, the public will be quick to jump on the bandwagon. Similarly, if a team plays flat for two straight weeks, the public will fade them. In both instances, the smart play will be to swim against the tide of public opinion.

Another smart tactic is to go against streaks, such as betting against a team that has won four games or more in a row to cover the fifth week. Players should also appreciate that teams on losing streaks are more likely to over-perform, and bet accordingly. Taking a quick look at this week’s card, a team seeing an increase in public support is the Chargers. They are the first NFL team to win four straight while giving up 24 or more points in each game. Laying 13 points against Oakland might be considered a “trap” game.

What are players betting this week at Pinnacle Sports Book?

The Cowboys are coming off their biggest win of the season, knocking off the previously undefeated Colts. With last week’s solid performance and Dallas’s reputation for playing well on Thanksgiving (Dallas is 23-14-1 at home on Thanksgiving), they are an easy public selection. Although the sharps have not expressed an opinion on this game yet, our opener of Dallas -9.5 was bet all the way up to -11.

The fifth-ranked Razorbacks are still in the chase for a BCS Championship Game appearance. They have two difficult match-ups remaining: LSU, and the SEC Championship. In addition to winning out, Arkansas needs USC and Florida to lose. We opened Arkansas at -1.5, and took heavy balanced action. There is no obvious sharp side at the time of writing.

USC is less than 1/100th of a point behind Michigan in the BCS standings. If the Trojans win this week and again next week versus UCLA, they should move to the #2 spot and play for the national championship. Notre Dame is a long shot to catch Michigan and will likely play in another BCS bowl regardless of whether they win.

We opened the Trojans at -6, and took a lot of early sharp action on USC. We found a “pressure point” at USC -7. The sharps keep playing USC at -7, but pass at -7.5. Irish backers seem content to play them at +7 or +7.5. The Trojans have recently dominated the Irish, winning the last four contests. USC has been especially strong under Pete Carroll in November, racking up a 19-0 record (including 3-0 this year).

Our favorite type of game to book is one where sharps play both sides, as in this game. Everyone knows Chicago’s offense has had problems ­‑ they’re ranked only 19th in terms of yards per play. The Bears offense also has 20 giveaways; only five teams have turned it over more this season. Despite this, the Bears have the second best turnover differential at +9. In addition to forcing turnovers (#1 in the league with 29), the defense has scored five touchdowns on returns. When you have a team as polarized as Chicago, sharps often line up on different sides, each believing their methodology is more valid than the others.

Despite Eli Manning’s poor performance versus Jacksonville on Monday Night (19 of 41 passing with 1 TD and 2 INTs), the Giants are getting backed by sharps and the public alike. The G-men opened at -3 +104, and have been favored by sports bettors at a 5:2 ratio.