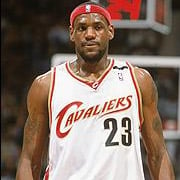 The 2006-07 NBA season doesn’t tip-off until tomorrow night and already leading online sportsbook PinnacleSports.com has handicapped the race to be named the league’s most valuable player. The largest sports betting site on the Internet, PinnacleSports.com has calculated odds on 13 perennial All-Stars being named the 2007 NBA MVP. Although the list of pre-season MVP candidates includes four previous award winners, the oddsmakers favor one of the league’s young guns to ascend to the throne of NBA royalty.

Entering only his fourth season as a professional, Cleveland’s LeBron James has already become one of the league’s most dynamic players and PinnacleSports.com lists “King James” as a 2/1 favorite to become the youngest MVP in NBA history.

While he entered the league with much less hype than fellow draftee James, Dwayne Wade already has an NBA title and Finals MVP on his resume and currently has the second-best odds to win the league most valuable player award at 9/2. Two-time winner Tim Duncan is listed at 6/1 to add a third MVP to his trophy case, while Lakers’ star Kobe Bryant is 7/1 to capture his first and Dallas’ Dirk Nowitzki is 8/1 to become the first European to be named the league’s top player. Reigning two-time MVP Steve Nash is a 13/1 underdog to join the ranks of legends Larry Bird, Wilt Chamberlain and Bill Russell as the only “three-peat” winners in league history.

'LeBron James has improved steadily over each of his first three seasons to become one of the most complete players in the NBA, capable of putting together a triple-double anytime he walks on the floor,” said Simon Noble of PinnacleSports.com. “The Pistons loss of Ben Wallace could leave the door open for LeBron to lead his Cavs to a Central Division title, which alone could ascend ‘King James’ to the MVP throne. Dwayne Wade has replaced Hall of Famer Shaq as the World Champs best player and nobody can discount Tim Duncan who can single-handedly lead the Spurs to the league’s best record. Although the odds are against him, Steve Nash puts up gaudy numbers every game and the return of Amare Stoudemire should pad his statistics while leading the Suns to yet another division title.”

PinnacleSports.com believes that All-Star Elton Brand (16/1) may get serious MVP consideration if he can lead the Clippers back into the playoffs for the second consecutive season. Although widely considered one of the NBA’s most talented players, Tracy McGrady is coming off yet another injury plagued season, but presents great value at 20/1 to win the MVP. Winner of the league’s top award in 2004, Kevin Garnett (33/1) MVP hopes rest on bringing the Timberwolves back into the playoffs after last year’s disastrous 33-win season. PinnacleSports.com lists 2001 MVP Allen Iverson at 35/1 to capture his second award, while 7-foot 6-inch Yao Ming is 43/1 to become the tallest MVP in league history. Meanwhile, Denver’s Carmelo Anthony (45/1) and the Celtics Paul Pierce (50/1) are  long shots to be named the league’s top player.

COLL AND PRO HOOPS FOR WED I SHOULD HAVE SAID SOMETHING on Tue, Jan 2021 by Timmy1961