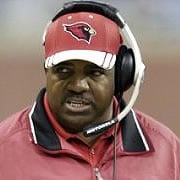 We’re only seven weeks into the NFL season and already the contenders have begun to separate themselves from the pretenders. Several head coaches are already starting to feel the heat as their teams are failing to meet pre-season expectations. With a number of teams off to a slow start, PinnacleSports.com today announced updated odds on which current NFL coach will be the first to lose his job.

The largest sports betting site on the Internet, PinnacleSports.com has created individual odds on 12 NFL head coaches becoming the first coaching casualty this season. After following up a choke job of historic proportions on Monday Night versus Chicago, with a loss last Sunday to the lowly Raiders, it’s no surprise that Arizona’s Dennis Green is the odds-on favorite to become the first coach to get his walking papers at 1/1 odds (i.e., win $1 for every $1 bet).

While only in his second year at the helm, Romeo Crennel (7/1) might be on the verge of losing his job in Cleveland as the team continues to falter and just this week, offensive coordinator Maurice Carthon resigned. Although widely considered the worst team in the NFL, Art Shell (8/1) may get some leeway from Al Davis in Oakland knowing that the team is in full rebuilding mode. With a shocking 1-6 start to the season, the playoff aspirations in Miami are all but gone and PinnacleSports.com now lists the chances of the previously unthinkable firing of Nick Saban at 9/1.

“Several media reports already indicate that unless Arizona wins at Green Bay this weekend, Dennis Green might not make it through the team’s Week 9 bye as head coach of the Cardinals,” said Simon Noble of PinnacleSports.com. “If blowing a 20-point halftime lead on Monday Night Football and exploding at the post-game press conference weren’t enough, Arizona were then dominated by the previously winless Raiders – a sure sign that Green’s days are numbered. The race to become the first NFL coaching casualty would even be hotly contested without Green in the equation as Crennel, Shell and Saban all appear to be firmly headed for the chopping block.”

The oddsmakers at PinnacleSports.com list Buffalo’s Dick Jauron at 11/1 odds to get his walking papers first, even though he’s only in his first season leading the Bills. Veteran coaches Jeff Fisher (13/1) and Joe Gibbs (13/1) are also solid candidates to become the first coaching casualty this season as their teams have combined for a total of just three wins. San Francisco’s Mike Nolan and Detroit’s Rod Marinelli, who are in the midst of rebuilding projects with their teams, have both been listed at 15/1. Although Tampa Bay has rallied for back-to-back wins after starting 0-5 this year, PinnacleSports.com still lists head coach Jon Gruden at 24/1 to become the first coach to get his pink slip this year. Meanwhile, head coach of the reigning Super Bowl Champion Pittsburgh Steelers, Bill Cowher and first year coach Mike McCarthy of Green Bay, are both listed as long shots to be the first coaching casualty at 31/1.

Which Of  These NFL Coaches Will Lose His Job First?

COLL AND PRO HOOPS FOR FRI THURS OK RUNNIN LLATE AS USUAL NOT ENOUGH HRS on Fri, Jan 2021 by Surfer