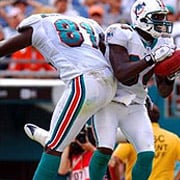 A general rule in gambling is to beware of the Trendy Team. The public usually gets it in its mind that this team or that team is going to have a "breakout" year or be a "sleeper" this season. The trouble is, when everyone thinks that about a crew theyâ€™re no longer a "sleeper". Theyâ€™re shackled by the heavy, cold steel grip of expectations.

That, and The Public is usually wrong.

Thatâ€™s where weâ€™re at with Miami. They ran off six consecutive wins to end 2005, made a few high-profile moves in the offseason, and are now the sheik pick to come out of the AFC East.

Hype is the kiss of death. But to be honest with you, there may be some merit to all of this.

The acquisition of Dante Culpepper gives the Dolphins offense a leader that they havenâ€™t had since some Marino guy took his Isotoners and went home. His ability to consistently throw the deep ball should reenergize the careers of Chris Chambers and Marty Booker. Also, the best defense can be a good offense.

However, there are karma concerns. Ricky Williams was banished to Canada. Miami signed career underachievers L.J. Shelton, Dan Wilkinson and Will Allen. Thereâ€™s the awkward Jason Taylor-Zach Thomas divorce thing (theyâ€™re not divorcing each other, but Taylor is separating from Thomasâ€™ sister). Culpepper didnâ€™t exactly leave Minnesota under the best of circumstances, and he wasnâ€™t Mr. Reliable when he was there.

All in all, this is a tough team to read. The talent is there, but with some volatile personalities and inconsistent performers decorating the roster you have to wonder how hard you can press the Dolphins. It will be a read-and-react situation. And donâ€™t be surprised if they pulled the classic Start With a Bang, Finish With a Whimper that Miami is known for.

Offense: The tools are in place, but now they have to hope that Culpepper can be the straw that stirs the drink. Ronnie Brown needs to stay healthy, and both Chambers and Booker need to step up. The line made tremendous strides last season, and will now be charged with protecting Culpepperâ€™s knee. A lot of that responsibility falls on the shoulders of Shelton, who has a million-dollar body and a 10-cent head. They had the eighth-worst third-down conversion rate last year (35.1 percent) which helped contribute to their No. 30 time of possession ranking.

Defense: The Miami defense played better than its ranking last year. Their 49 sacks were second best in the league, and they were No. 7 against the run in terms of yards per carry against (3.7). However, the top eight defensive lineman in their rotation average 33 years old. I guess the good news is that there are eight of them. They lost both starting corners, but fortunately Miami doesnâ€™t face many pass-happy teams this year. A lot falls on the health of Thomas in the middle because they have little depth at LB. Thatâ€™s also why itâ€™s so important for Channing Crowder to make an impact.

X-factor: Culpepper. Can the knee hold up? If not, I think Joey Harrington is a great insurance policy. However, if they want to have a special year it will be on the arm, er, knee of Culpepper.

Outlook: Iâ€™m torn on the Dolphins. Theyâ€™ve received a lot of hype, and I see a lot of potential landmines, but I did pick them to win the division. I donâ€™t like Culpepper. Iâ€™ve never liked him. And their defense is old. But honestly, this pick reflects the respect that I have for Nick Saban. We will see