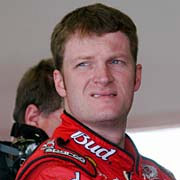 The Daytona 500 will take place at the Daytona International Speedway on February 18th. You can tune in and watch Nascar’s premier event on Fox at 2:00 p.m. E.T. Sunday.

First you will want to make your 2007 Daytona 500 Predictions to add a little spice to this glorified race. The Daytona 500 started in 1959 and holds 90,000 fans in a jam-packed atmosphere that is unlike any other in the racing world today.

Let’s take a look at what we are working with for this prestigious race to give ourselves the best chance to win on Sunday.


Last year’s defending champion Jimmy Johnson opens as a 4/1 favorite to win the Daytona 500. He is also the reigning Nextel Cup Champion from the 2006 season. He is along side Dale Earnhardt Jr. as a 4/1 favorite as well. Earnhardt Jr.’s father died on this track and every time he returns to Daytona he goes the extra mile to try and win one for his father. Tony Stewart and Jeff Gordon are right behind these two studs, posting 5/1 odds each to win the Daytona 500. We believe one of these four guys will win this event but we are taking Tony Stewart to come out on top. He had a disappointing 2006 season and we fill he is hungrier than ever to get in the winners circle over the weekend. This guy is too good to be held down for too long. He will be climbing the fences with his patented celebration once this race is all said and done.

We also make our 2007 Daytona 500 predictions on head-to-head match-ups this year just like we do every Nascar season. These head-to-head bets can be very profitable and they are the most popular Daytona 500 bets that sportsbooks offer. This is when you get to pick one driver to finish ahead of another listed driver. Right now at Bodog there are nine head-to-head match-ups offered. The first listed is Elliot Sadler (-110) and Jamie McMurray (-120). This means that the linesmakers at Bodog believe Jamie McMurray will finish ahead of Sadler. Thus you would have to bet $120 to win $100 on McMurray, whereas you only have to bet $110 to win $100 on Sadler to finish ahead of McMurray. McMurray has only 1 career win but 22 Top-5 finishes and averages an 18th place finish in each race he runs. Sadler has 3 careers wins but only 15 Top -5 finishes and his average place is only 21st. There are two races a year at Daytona and in 2006 Sadler finished 4th and 6th respectively. This recent success at Daytona leads us to believe that Sadler will have another solid finish this year and will end the race ahead of Jamie McMurray on Sunday.

Another great head-to-head match-up listed at Bodog has Dale Earnhardt Jr. at (-145) versus Kevin Harvick at (+115). Jr. is the obvious favorite here because of his recent success at Dayton International Speedway. He has placed 3rd in three out of the last six races held at Daytona and he won the thing outright in 2004. His worst finish in his last 6 starts was a 13th place finish last year. That’s some solid driving from the fan favorite and you can expect another solid run this season. Fans and Nascar experts believe Kevin Harvick is coming around and will be a forced to be reckoned with in the near future of Nextel Cup racing. It’s just not going to happen for him this weekend. His best finish in the last 4 appearances at Daytona is 9th place from last year’s race. His previous 3 finishes were 14, 28, and 24 respectively. He just doesn’t have what it takes to compete with the credentials that Earnhardt Jr. offers. This might be the best place to put your money in all of the head-to-head match-ups we have analyzed. Place your money with our 2007 Daytona 500 prediction on Dale Earnhardt Jr. here.

The most anticipated head-to-head match-up has to be between Tony Stewart (-130) and Jimmie Johnson (Even). It’s a minor surprise that Johnson is an underdog here due to his Daytona 500 win in 2006. We feel this is for good reason as well and we side with Bodog on this one. Stewart runs great on this track, finishing no worse than 7th place in his last 7 appearances. He has won outright twice and finished 2nd once during this 7-race stretch. Those numbers are simply unheard of for Nascar’s featured race. Jimmie Johnson backed up his 2006 Daytona 500 win with a disappointing 32nd place finish in the 17th race of the season last year at Daytona. We believe that he will be towards the top of the pack Sunday but will be no match for Tony Stewart. Stewart wins this thing outright as our strong Daytona 500 prediction and we are sticking to it. You don’t mess with this guy when he sets out to accomplish a goal. His goal is to make up for last year’s disappointment by winning the 2007 Nextel Cup title and it starts with the Daytona 500 on Sunday.

COLL AND PRO FOR THURS WED NOTES UP DOWN on Thu, Jan 2021 by Dawgwalker71