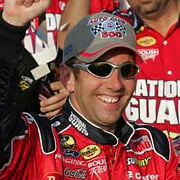 For the 3rd time in 3 years Greg Biffle has won the NASCAR Nextel Cup Series finale at Homestead-Miami Speedway. Biffle was able to hold off second place Martin Truex Jr. for the victory.

Biffle was in the top 5 most of the day en route to his victory in the Ford 400. Despite Biffle's previous two wins at Homestead, oddsmakers were quite generous with Biffle's Odds to Win at +1480 as posted by PinnacleSports.com. Bettors who backed Biffle enjoyed a huge payout of $1480 for everyone $100 bet.

Rounding out the top 5 at Homestead was Denny Hamlin in third, Kasey Kahne in fourth and Kevin Harvick in fifth.

The big story of the weekend though was Jimmie Johnson. After finishing in the top 5 in the Nextel Cup Points Standings every year of his career he finally takes home his first Nextel Cup Championship.

Johnson needed to finish twelfth or better in the Ford 400 to secure his place in history as a Nextel Cup Champion. He did three better than that as he came home ninth on Sunday.

For winning the 2006 Nextel Cup Championship he takes home the championship trophy and a prize of $6,200,000.

The Ford 400 capped an amazing run for Johnson's 48 Lowe's team in the Chase for The Nextel Cup. Since a poor start in the Chase, Johnson scored an amazing run of 5 consecutive races with a top ten finish and a four race streak of second or better. Johnson finishes the season unofficially with 6475 points to second place Matt Kenseth's 6419

The coveted eleventh place position which pays $1,000,000 looks like it will be going to Tony Stewart unofficially. The 2005 Nextel Cup Champion is scored in eleventh after Homestead with 4727 points. Twelfth place Carl Edwards unofficially has 4428 points.

Several Chase drivers traded positions Sunday at Homestead. Denny Hamlin gained a spot moving to third, that forced Kevin Harvick back to fourth and Kasey Kahne advanced a spot to eighth which pushed Mark Martin back a spot to ninth.

This race also marked the end of some era's in NASCAR. The Ford 400 was the last race for Dale Jarrett who will be moving to Toyota next season, Mark Martin who will leave Roush Racing and will run a modified schedule of Cup, Busch and Craftsman Truck Series races, Casey Mears who leaves Gnassi for Hendrick and Brian Vickers who leaves Hendrick for Toyota.

It will be an interesting off-season for sure. Between all the driver, crew and team shakeups, the introduction of Toyota into the Nextel Cup Series and the first races featuring NASCAR's Car of Tomorrow (COT) , 2007 promises to be even more exciting than the 2006 Nextel Cup Season.

Congrats to Jimmie Johnson and Hendrick Motorsports, see ya in February!