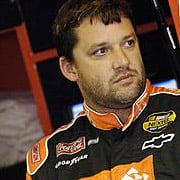 Stewart Goes Back to Back; Johnson Assumes Chase Lead

Complete Texas Results :: Nextel Cup Points Standings
Tony Stewart missed the Chase for The Nextel Cup, but has won the last two races with his Victory Sunday at Texas in the Dickies 500 and three of the final ten Chase races.

The race was decided by a green, white checkered finish after Scott Riggs crashed four laps from the finish after running in the second position.

PinnacleSports.com had Stewart's Odds to Win listed at +725 for Sunday's race at Texas. Bettors who took Stewart enjoyed a $725 payout for every $100 bet. In the past two weeks Stewart's backers have seen a net profit of $2125 off just $200 in bets with is back to back victories.

The top 4 finishers at Texas on Sunday for the Dickies 500 were Chase contenders. Chasers Kevin Harvick finished third, Kyle Busch finished fourth and rounding out the top five was Clint Bowyer who finished fifth.

Dale Earnhardt Jr. was the big winner on Sunday after a battling the flu all weekend and a crash early in the race he was still able to bring the Budweiser Chevy home sixth and advance one position in the Nextel Cup Standings.

Jeff Burton and Kasey Kahne were the big losers at Texas. Burton crashed on lap 89 and missed the majority of the race before limping his damaged car to a thirty-eighth place finish. Kahne had problems late in the race, with just a handful of laps to go Kahne lost an engine and had to settle for a disappointing thirty-third place finish after running in the top ten most of the day.

After Texas it looks pretty hopeless for some of the Chasers. With only two races left in the Nextel Cup season the Chase is all but over for Kyle Busch, Mark Martin and Kasey Kahne who all find themselves 200 points or more out of the Chase lead. Jeff Burton is only 184 points out but his hopes have to be dwindling as well.

Kevin Harvick and Jeff Gordon still have a slim chance at a Championship but they are going to need some real good luck these last two races and need the drivers in front of them to have some really back luck.

Right now it looks like a three man race to the finish between Jimmie Johnson, Matt Kenseth and surprisingly Dale Earnhardt Jr..

This week the Nextel Cup Series heads into Phoenix for the Checker Auto Parts 500. The winner of the spring race at Phoenix was Kevin Harvick and the defending champion of this week's race is Kyle Busch.