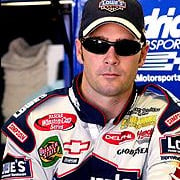 Jimmie Johnson was able to hold off a hard charging Denny Hamlin in the final laps of the Subway 500 on an emotional day for Hendrick Motorsports.

It was the first Victory for Johnson at Martinsville since 2004 when a plane crash took the lives of team owner Rick Hendrick's Son, Ricky, his brother John and John's daughters Kimberly and Jennifer Hendrick as well as championship Hendrick Motorsports engine builder Randy Dorton.

Johnson took the lead from Bobby Labonte on lap 444 and never looked back despite a tough battle with Denny Hamlin in the final five laps of the race. The win was the fifth of the season for Johnson and second of his career at Martinsville.

Online Sports Book Pinnacle Sports had Johnson's Odds to Win listed at +602 for the Subway 500. Bettors who backed Johnson saw a $602 payout for every $100 bet.


A win was just what Johnson's championship hopes needed. His victory in the Subway 500 moved him from seventh in The Chase for The Nextel Cup to third and sliced his points deficit from 146 points to just 41 points.

Rounding out the top 5 in Sunday's race was Bobby Labonte in third, Tony Stewart in fourth and Jeff Gordon in fifth. Bobby Labonte's third place finish was his best finish of the season and comes on the heels of his fifth place finish last week at the Bank of America 500. It was also the first time since 2001 that a Petty Enterprises car had a top 5 finish at Martinsville.

The big news of the weekend though has to be Jeff Burton who was the Chase for The Nextel Cup points leader coming into the race at Martinsville. Burton lost an engine on lap 218 after he made contact with Joe Nemechek earlier in the race. As a result Burton wound up finishing forty second and skids from first to fifth in the points standings, 48 points behind the new leader Matt Kenseth.

Burton's engine trouble shook up the rest of the Nextel Cup points standings. The first five drivers in The Chase are now only separated by 48 points. Matt Kenseth, Kevin Harvick, Jimmie Johnson, Denny Hamlin and Jeff Gordon all gained positions in The Chase while Dale Earnhardt Jr, Kyle Busch and Mark Martin all lost positions but gained points on the lead. Kasey Kahne remained eighth in The Chase standings but decreased his points deficit from 160 after the Bank of America 500 to just 99 after Martinsville.

The feel good story of the weekend has to be Ward Burton. Ward has been out of Nextel Cup racing for over two years coming into the Subway 500. Most didn't even expect Ward to qualify for Sunday's race. He did qualify though and proved to his doubters that he is still a Nextel Cup contender after finishing twenty sixth in the Subway 500 and running around the lead lap much of the day. Ward hopes to race at least twice more in 2006 possibly next week at Atlanta and potentially when the Cup Series heads to Phoenix. No plans have been revealed yet for 2007.

Next week the Nextel Cup Series heads into Atlanta Motor Speedway for the Bass Pro Shops 500. Spring winner Kasey Kahne will look for the season sweep on the 1.54 mile Georgia oval.