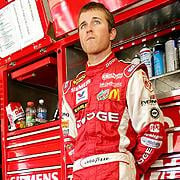 Kasey Kahne led 134 of 334 laps Saturday night to win the Bank of America 500 and sweep both Nextel Cup Series races this season at Lowe’s Motor Speedway.

Kahne passed Jimmie Johnson with 26 laps to go and never looked back crossing the finish line almost a full second ahead of Johnson who took second.

Online sports betting site Pinnacle Sports had Kahne listed at +468 for Saturday’s race. Bettors who backed Kahne for the win saw a $468 payout for every $100 bet.

The victory was the sixth of the season for Kahne which leads all Nextel Cup Series drivers. Despite the win Kahne only gained 25 points and one position moving from ninth to eighth on Cup Series leader Jeff Burton who finished third Saturday.


There must have been a full moon out Saturday night because the race at Lowe’s was hampered with mechanical failures and just plain bizarre events.

The madness got started on the very first lap with a wreck started by Robby Gordon which claimed 14 cars, none of which were Chasers believe it or not. This crash set in motion the most bizarre incident of the night if not the entire season when NASCAR decided to take the field back green while there were safety vehicles still on the track. Luckily the mistake was caught quickly and the yellow came back out before any of the racers encountered the safety vehicles.

Mechanical failures were plenty Saturday night, Elliot Sadler, Jamie McMurray and Jeff Gordon all had mechanical problems that ended their night while several other drivers including Carl Edwards, Jeff Burton and Kevin Harvick all reported problems but were able to finish the race.

It was also a rough night for Mark Martin who was running in the top 5 most of the night. That was until lap 242 when J.J. Yeley came down in front of Martin while he was trying to make his way to the pits. The collision sent Martin violently head on into the wall and subsequently to the garage.

As far as the Chase for the Nextel Cup is concerned; Kevin Harvick, Dale Earnhardt Jr., Jimmie Johnson, Kasey Kahne and Kyle Busch all gained ground on leader Jeff Burton while Mark Martin, Denny Hamlin and Jeff Gordon all lost ground. The big loser is definitely Gordon who went from seventh to tenth in the standings after running well most of the night before he lost his engine on lap 301.

Next week the Nextel Cup Series heads to the shortest track on the NASCAR circuit, Martinsville Speedway in Virginia for the Subway 500. Tony Stewart won the spring race at Martinsville.