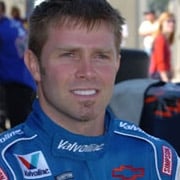 There have been three Nextel Cup Series races at Lowe's Motor Speedway in Charlotte this year and Scott Riggs has been on the pole for all of them.

It will be an all Evernham Motor Sports front row with Riggs knocking teammate Kasey Kahne off the pole late in the qualifying session with a qualifying speed of 191.469 mph. That speed was over a mile per hour faster then Kahne who posted a 190.194 mph.

In a bizarre turn of events Kurt Busch who qualified third for the Bank of America 500 had his qualifying time thrown out after his Miller Lite Dodge failed post race inspection.

NASCAR officials said Busch's right rear shock did not meet NASCAR specifications. As a result Busch will have to start 42nd for the race.

Casey Mears will take Busch's spot in third and rounding out the top five will be Elliot Sadler and Kevin Harvick.