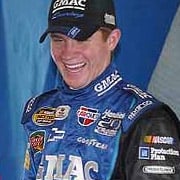 Brian Vickers won his first career Nextel Cup race after a wild final lap at the Talladega Super Speedway in the UAW Ford 500. Vickers triggered a collision on the final lap while running third to take out first place Dale Earnhardt Jr. and second place Jimmie Johnson. Earhardt dominated the final laps after trouble early that saw him a lap down at one point. Sunday’s victory was the first win for Vickers in 106 Nextel Cup Series starts.

Online Sports Book Bodog.com had Brian Vickers listed as a 30/1 underdog for Sunday's race. Bettors who had confidence in Vickers were able to turn every $100 bet into an incredible $3000 payout.

Jeff Burton leaves Talladega the Chase for the Nextel Cup points leader but only by a slim margin. Burton was running fifth with 10 laps to go when he felt a tire going down on the final restart of the race. That flat cost Burton valuable time on pit road and shuffled him back to a 27th place finish.

Jeff Gordon also had trouble that cost him a good finish. Gordon had a strong car all day before he was collected in a wreck on lap 137 which sent him to the garage for repairs. It was the second week in a row Gordon had trouble that resulted in a poor finish and a lackluster points day.

Matt Kenseth, Kevin Harvick and Mark Martin were the big winners in the Chase for the Cup at Talladega. Kenseth finished fourth at Talladega and moved from fourth to second in the Chase standings. Kenseth is only six points behind leader Jeff Burton.

Mark Martin remained third in the Chase standings but was able to close his gap on Burton to 10 points with his eighth place finish.  Kevin Harvick finished sixth at the UAW Ford 500 and gained one spot in the Chase standings moving from fifth to fourth. Kasey Kahne also had a very good day at Talladega finishing second behind Vickers but that finish was only good enough to move Kahne from tenth to ninth in the Chase for the Nextel Cup.

The big losers in the Chase after Talladega are Denny Hamlin, Jeff Gordon and Jimmie Johnson. Hamlin was collected in two wrecks Sunday and was only manage a twenty-first place finish which dropped him three spots in the Chase standings from second to fifth. Jeff Gordon was also collected in one of the same wreck that plagued Denny Hamlin and wound up finishing thirty-sixth. Johnson’s last lap collision with Vickers and Earnhardt Jr. saw him maintain eighth position in the Nextel Cup Standings 156 points behind Chase leader Jeff Burton.

Next week the Nextel cup series heads to Lowe’s Motor Speedway in Charlotte North Carolina for The Bank of America 500. This is only night race in the Chase for the Nextel Cup and the only Saturday race.