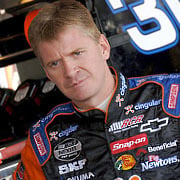 For the first time in 175 races Jeff Burton was able to pull his car into Victory Lane after a Nextel Cup Race. For you math wizards out there that is almost 5 years since Burtons last Cup Series victory. Making the win even sweeter is the fact that now Burton also finds himself atop the Nextel Cup points standings by 6 points over second place Jeff Gordon.

Burton didn't lead a lap all day until 6 laps from the finish when he was able to squeeze by Matt Kenseth after a fierce battle for several laps.

The pass wasn't really necessary however because shortly after Burton took the lead Kenseth ran out of fuel after gambling he could make it 100 plus laps without a pit stop. Kenseth was still able to salvage a 10th place finish and maintain third position in the Chase for the Nextel Cup.

Dover spelled disaster for several of the Chasers. Kasey Kahne was collected into an early wreck with 2005 Champion Tony Stewart and Kyle Busch blew an engine about halfway through Sunday's race. While technically still possible, with only eight races left it seems unlikely that either Kahne or Busch will have the luck needed to overcome their point deficits.

Hopes for a Championship this season also aren't looking very good for Dale Earnhardt Jr. or Jimmie Johnson. Even though Johnson who finished 13th at Dover gained a spot in the top 10 moving up to eighth, he is still 136 points behind the leader Jeff Burton.  The best Earnhardt Jr. could manage Sunday was a 21st place finish. Earnhardt Jr. battled an uncooperative car all day and finds himself 102 points out of the points lead.

This week the Nextel Cup Series heads into Kansas Speedway for the Banquet Foods 400.