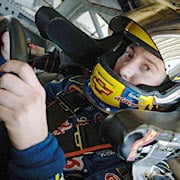 As Jeff Burton considered how to beat Kyle Busch in the closing laps at Bristol Motor Speedway, he couldn't shake the lessons his mother taught him as a child.

''My mother always told me to do onto other people the way you want them to do you,'' Burton remembered. ''That's the only thing I know to do. I've always tried to let the guy I am racing with set the rules. ... Kyle drives hard. He drives really hard. But he's always raced me with respect.''

And with that, Burton refused to bump Busch out of the way Sunday, instead pulling alongside of him before Busch beat him in a drag race to the finish line to win the first Car of Tomorrow race.

The two have battled in the Busch Series this season, and had a stirring door-to-door duel in Las Vegas two weeks ago that Burton won as Busch spun backward across the finish line.

Burton credited Busch with racing clean that day, and both drivers had it fresh in their memories on the final three laps Sunday.

"Jeff Burton easily could have dumped me there in [Turns] 3 and 4, but I think our Vegas finish helped me out a little bit with that," Busch said. "I think I had some brownie points to use up."

Busch took the lead with 16 laps to go on a smooth pass around Denny Hamlin in thick traffic and stayed there through a pair of cautions. He had driven away from the competition when the 15th and final caution set up a three-lap shootout.

With Busch and teammate Jeff Gordon running 1-2 at the restart, the two plotted their own strategy with their respective crew chiefs.

"Well, good job guys," Busch sighed at the final caution. "We'll do what we can. I can't promise you anything."

It didn't sound that way on Gordon's channel.

It never mattered, though, as Burton jumped past Gordon on the restart and quickly pulled onto Busch's rear bumper. Burton looked low and Busch threw a block, then he went high and Busch blocked that, too.

Burton finally pulled alongside Busch as they closed in on the finish line, but Busch nipped him at the flag for his first Nextel Cup victory on a short track.

Both drivers could have spun Busch to get past him, and the 21-year-old appreciated the veterans for racing him clean.

"Without Jeff Gordon and Jeff Burton behind me, I never would have won this race," Busch said.

"I could have used the bumper to move him out of the way and win the race, but I didn't want to," Burton said. "I can lay in bed [Sunday night] and wonder, 'What if?' But that's what I chose to do. If you can't pass him without knocking him out of the way, do the best you can. He's driven me clean, and that's what I did with him."

Gordon, the pole-sitter, wound up third and was thrilled with the effort after struggling for most of the race.

Busch's win was the third in a row for Hendrick Motorsports -- Jimmie Johnson won the past two Cup events -- and was the 200th overall win for car owner Rick Hendrick. It also was the 600th for manufacturer Chevrolet, which introduced the Impala SS this weekend to coincide with NASCAR's debut of the Car of Tomorrow.

The COT spent seven years in development as NASCAR tried to build a uniform car that would cut costs, improve safety and even the competition. It will be used in 16 races this season as NASCAR phases it in through the 2009 season.

It's introduction had teams fretting for months over performance and the many unknowns the COT created.

But when the race finally began, everything seemed pretty normal. Except for the design of the cars, which have a front splitter and a detachable rear wing, nothing was out of the ordinary.

And the worst fears -- that the track would be littered with parts and pieces every time one of them wrecked -- never developed. But the drivers said its too early to pass judgment. The car races again next week at Martinsville Speedway, another short track, before getting its first true test next month in Phoenix.

"If the car is safer and races better, then I am all for it," Gordon said. "But we can't answer that question this weekend."

Gordon took the points lead as Mark Martin, who came into the race on top, skipped the event and turned his keys over to rookie Regan Smith.

Smith finished 25th and Martin dropped to eighth in the standings - 162 back. Gordon leads Burton by three points.

As expected, Juan Montoya struggled at his first short track, finishing 32nd after an early spin dropped him several laps down. But he still considered the day a success.

"We got the car home and scored some more points and just go on to the next one," he said. "It was pretty easy, to be honest."

"You know, I used to think Champ Car was tough to drive," Allmendinger said. "But do 500 laps around this place. That's a lot of work."

The race initially belonged to Tony Stewart, who pulled away to a huge lead during the 257 laps he was out front. But his Chevrolet lost power during a caution with 211 laps to go, and he was livid as he pulled into the pits.

He bemoaned his bad luck in an expletive-laden rant as his Joe Gibbs Racing team worked under the hood of his car. He returned to the track 23 laps down.

Kasey Kahne, who ran in the top five for the first half of the race, spun out moments before Stewart went out to take himself out of the competition.

With the two best cars out of the running, the race opened up for everyone else. Busch and Hamlin traded the lead several times until traffic allowed Busch to get by him for good.