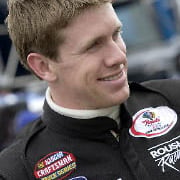 Enough whining, let's get to Atlanta.

The Smokeless Set complained before last weekend's Vegas race, and they complained after. The track was too slick, the tires were too hard, it was too dangerous to race side-by-side. Boo. Hoo.

Enough. Now we're at Atlanta, a time-honored track that's also dangerous as hell because of its speeds, but which everyone likes because it's got tradition. It's not that races don't get any less strung-out here, or that the speeds aren't just as death-defying, or cars won't get mind-numbingly loose to the point where they'll wreck themselves.

It's just that everybody will smile and say what a fun place Atlanta is to race. And remember, Atlanta is a clear parallel to Charlotte and Texas, so we can look at historical data from all three when we make our selections. Let's get to it!

Last Week: I picked the race winner, but because of the way we're currently allocating units, it was still a losing week. Because Kevin Harvick was bad and Dale Earnhardt Jr. was pretty good, we lost our head-to-head bet (on which we currently place six times as many units as our straight-up bets), so the fact that we had Jimmie Johnson, the winner, for 1/6th of a unit at just +650 wasn't enough to overcome the H2H loss. Alas, that means -.25 units for Week 3 of the Nextel Cup season, though we're still at a positive 1.23 units (or a 27.3% return) for the year. (Note that if you'd like to change your betting style and simply gamble one unit on every pick, in an admittedly small sample size so far this year we're up 14.62 units.)

Take Jimmie Johnson (+475), 1/6th unit. Johnson is the prohibitive favorite again on Sunday, because he's racing very well right now, and because he's amazing on the Atlanta-Charlotte-Texas triumvirate. While Charlotte is his real best track, Atlanta Motor Speedway ain't bad: in his last seven AMS events, J.J. has come 2nd, 6th, 16th, 2nd, 1st, 4th and 3rd. He probably didn't have the absolute best car at Vegas last weekend, but that's a measure of a team's excellence: put the right tires on at the right time, make the right adjustments, and eke ahead of the competition when it counts. These are extremely low odds, obviously; think of it as a hedge against the race's most likely outcome.

Take Jeff Gordon (+750), 1/6th unit. Unlike Johnson, I think Gordon actually was the fastest car at Vegas last week. He led the most laps, and he was maybe 10 laps from holding on for his first win of '07. That milestone could very well come this week. Gordon was very good in practice Friday, and he qualified fifth (Johnson qualified third). The #24 team currently sits second in points, and as soon as Mark Martin (+1650) sits out the next two races, Gordon will likely have the lead. He's won at Atlanta on four occasions, most recently in the fall of 2003, and he's got three straight finishes in the top six here. Most importantly, if you take the last two races together, Gordon has pretty clearly had the best downforce program in the young 2007 season.

Take Dale Earnhardt Jr. (+1550), 1/6th unit. We're getting Junior at higher odds because he practiced (19th) and qualified (22nd) poorly on Friday, and this track's history dictates that the race winner usually comes from inside the top 10 starting positions (that's been the case in seven of the last eight Atlanta events where qualifying hasn't been rained out). Still, Little-E has a history of coming from mediocre starting positions and producing good finishes at this track. In this race last spring, Junior started 26th and finished third with his car completely banged-up from multiple wrecks; in the fall '05 Atlanta event, he came fourth after starting 17th; and in the spring of '03, he started 37th and finished third. Hey, it's not an optimal arrangement; you're not normally going to get odds like this on Junior at this venue. But I think it's a chance worth taking.

Get all of today's NASCAR Nextel Cup picks for the Kobalt Tools 500 from Atlanta by visiting www.spreadexperts.com