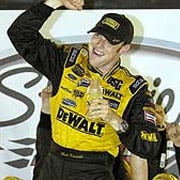 On Academy Awards night, Matt Kenseth produced his own sequel worthy of an Oscar.

Kenseth, driver of the No. 17 Carhartt Ford for Roush Fenway Racing, led 129 laps – including the final 23 – at California Speedway and defended his 2006 win in the Auto Club 500 on Sunday. It was also the second victory in as many days for the 34-year-old, having claimed the win in yesterday’s Stater Bros. 300 NASCAR Busch Series event.

The victory was Kenseth’s 15th of his NASCAR NEXTEL Cup Series career and second at Fontana in Cup competition.

The win total at the 2-mile speedway increases to six overall for the Cambridge, Wisconsin native when you combine his Busch Series exploits.

It was also Ford’s eighth win in California NEXTEL Cup action and Roush Fenway Racing’s 13th in all NASCAR races at the speedway.

Much like yesterday’s Stater Bros. 300 Busch Series event, Kenseth was chased to the finish line by a Hendrick Motorsports driver who was unable to catch him in the waning moments. Polesitter Jeff Gordon, driver of the No. 24 DuPont Chevrolet finished runner-up, .679 seconds off Kenseth’s pace.

Despite missing the first race of the season, Brian Vickers made history for Toyota with his result as he earned the first top-10 finish in a points race for the Japanese manufacturer in his No. 83 Red Bull Camry.

"I think this finish says a lot about the whole group, not just Team Red Bull, not just the No. 83, about Toyota, about Red Bull," Vickers said. "To be a new team in such a competitive series and come in our first race and get a top 10. I’m so proud of everyone.

"Our goal is to go to the next race and focus on making the race. Hopefully we can come out of it just like we did today. Until we get in the top-35 (in points), that has to be our goal – we can’t forget that."

With four laps remaining in the Auto Club 500, Daytona 500 winner Kevin Harvick looked to be in position to win his first California Speedway race, but as the field was readying for the final restart following a red flag period, he brought his No. 29 Shell Pennzoil Chevrolet to pit lane because of a flat left front tire – dropping from second to a 17th place finish.

"It is a little disappointing, the thing was really good," Harvick said. "This Chevrolet was really fun to drive today. To come to California where we have struggled before and have a chance to win, is awesome. We just had some bad luck. There is nothing we can do about that. That is two days in a row we had tire trouble, so what do you do."

Although Stewart finished eighth overall, it was a disappointing finish as he was amongst those with a dominant car earlier in the day. However, a mistake by the driver of the No. 20 Home Depot Chevrolet on lap 159 – leaving pit road too quickly – cost him a drive-through penalty, which he served under green flag conditions.

He stayed on the lead lap despite the penalty and showed how good his car was by driving back to finish inside the top-10.

"We had a good car, that’s for sure," Stewart said. "I was 300 rpm below what I needed to maintain pit road speed. So, unless the line (where a timing light is set up) is in a spot where I don’t know it’s at… I don’t know. NASCAR has all that computer stuff and it tells you exactly when and where, so I’ll be interested to see it."

On the debut weekend for unleaded fuel in NASCAR, Dale Earnhardt Incorporated had the hardest time adapting to the change. Two of their drivers, Dale Earnhardt Jr. and Martin Truex Jr., encountered engine problems early in the 250 lap race. While Truex was only able to complete 13 laps, Earnhardt Jr. was able to return after engine problems appeared on lap 71. Unfortunately, it was a brief return as the engine expired for good shortly thereafter in the No. 8 Budweiser Chevrolet.

As a result, Truex and Earnhardt Jr. finished 41st and 40th respectively.

"I know the guys at the shop that build the motors are really upset right now. I just want them to keep their heads up, and we will figure it out," said Earnhardt Jr., who now has two consecutive DNF’s after his crash at Daytona. "The unleaded fuels just threw us a curveball. We haven't gotten the situation like we needed, but we will go over the two motors we lost this weekend."

The DEI cars were not the only ones with engine problems. Kasey Kahne, winner of last fall’s event at California Speedway and today’s outside polesitter, led the first 20 laps of the race and looked to be in contention for a victory until an engine problem forced him to come into the garage on lap 69.

After spending time in the garage, Kahne did return to the track.

The race featured a total of nine caution periods for 37 laps and one red flag for a hard crash involving David Reutimann, which set up the final four lap shootout.

Reutimann, driver of the No. 00 Domino’s Toyota, was able to walk away from the impact and appeared to be okay.

While the NASCAR NEXTEL Cup Series takes a weekend off until the UAW-DaimlerChrysler 400 at Las Vegas Motor Speedway on March 11, teams will hardly get to rest as they shift their focus towards the two day "Car of Tomorrow" test at Bristol Motor Speedway this week. The test, which begins on Wednesday, will help teams prepare for the "COT" debut on March 25th at Bristol, the first of 16 races that will use the new car design in 2007.