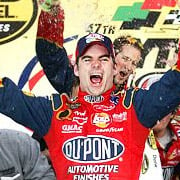 Our Experts Handicap The ''Super Bowl'' of Racing, The Daytona 500

Ah, the Daytona 500, when a young man's thoughts turn to those of pork rinds.

There's been more controversy in a week of pre-race mumbo jumbo than in an entire BALCO investigation, it seems. Matt Kenseth and Kasey Kahne got docked 50 points in the Nextel Cup standings, while Elliott Sadler and Scott Riggs got docked 25 points and Michael Waltrip got docked 100 points, all for illegal modifications to cars during last Sunday's qualifying runs.

To put things in perspective, Tony Stewart missed last year's Chase for the Championship by 18 points. So yeah, it can matter.

To add injury to, er, injury, each of these five drivers won't have his regular crew chief at the helm this weekend or next, and both Kenseth and Kahne will have to go a full four races without Robbie Reiser and Kenny Francis, respectively, while Waltrip has pretty much fired David Hyder, because Hyder may or may not have overseen the inclusion of jet fuel in Waltrip's intake manifold. Jet fuel!

I mean, sure, metaphorically speaking, maybe Barry Bonds put "jet fuel" in his biceps to hit all those homers. But we're talking actual jet fuel!

Anyway, to the predictions. Let's start 2007 off right.

Take Tony Stewart (+415), 1/6th unit. Stewart won last weekend's Bud Shootout and he won his heat of the Twin 150 races Thursday afternoon. The bad news is that no one has ever done those two things and then gone on to win the Daytona 500. The good news is if anyone on the Smokeless Set doesn't care about a stat like that, it's Smoke. He has become, in short order, the best restrictor-plate driver around. His four-year super-speedway finishing average is 8.3, best in the world, and his two-year finishing average at Daytona (four events) is 3.5, which is nuts. He's won each of the last two summer events here (which are "only" 400 miles), but he's never won the 500. That changes this week.

Take Dale Earnhardt Jr. (+612), 1/6th unit. Smoke's drafting partner toward race's end is likely to be Junior, and Little E's the guy from whom Stewart took the label of best plate-track driver around. Junior is better at Talladega than he is at Daytona, but he's a fantastic driver here, too. Need proof? During his Twin 150 on Thursday, Little E's former teammate, Michael Waltrip (+1656 as part of Field), slammed up into Junior's car, nearly wrecking him. Earnhardt Jr. went a lap down fixing the damage, waited patiently, got his lap back, and finished the race second, behind Stewart. He's stout. His lone drawback recently has been everyone fears him so much at these super-speedways that he tends to find precious little drafting help.

Take Kurt Busch (+2111). 1/6th unit. Busch is a vastly underrated plate-track driver. He's only got two finishes outside the top 10 in his last 10 super-speedway events, and in one of those he was in second place when Jamie McMurray (+5050) wrecked him. Busch the Elder was very strong in the second heat Thursday, giving up the win to Jeff Gordon (+713) on the last lap after charging from way behind late. It wouldn't shock me to see Busch put it all together and finally win this thing, and that would make for a pretty funny (and unpopular) Victory Lane celebration.

For a complete rundown of all our Experts Daytona 500 predictions visit http://www.spreadexperts.com